Filling in a blank 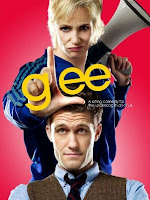 OK, so after reading Messiah's response to the post from the other day, I realize that apparently I never came fully crashing out of the Glee closet as I thought I had.

After initially saying "I don't get it" in the fall of 2009, I posted this in June saying that I had seen another episode, enjoyed it, and was going to Netflix the first disc and see how it went.

So yeah. It went. I love it. Emily loves it. Gleeks through and through.

I was so wrong about the show, in fact, that it's hard to believe I initially thought what I thought. But I've learned that this can happen with comedies/dramedies, which can require patience at the start. Almost all of the shows I've misjudged and then returned to were comedies. I was lukewarm about How I Met Your Mother in the fall of '05, to the point where I actually skipped a couple of episodes. And I documented my return to the Big Bang Theory. Both are now beloved TV staples.

Anyway, to sum up the last three posts: