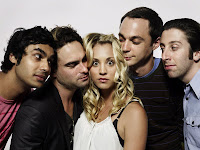 As the New York Times will tell you, The Big Bang Theory is exploding in its third season.

Spurred on by a bizarre summer rerun ratings spike, it's risen from 59 to 42 to 19 in the overall Nielsens, and it's now the fifth-most-watched show in the coveted 18-49 demo.

Back in '07, I watched the pilot, and told you all that it was just okay. "Wake me if it improves and becomes a hit," said I. Well, thanks to all the buzz and repeated urgings from two friends, I was awakened. (It also helped that we needed a way to make our Netflix subscription worth it, since we just aren't watching movies anymore).

Three Netflix discs later, I can say it's a fun, smart show. And we're only up to the 13th episode of the first season. By most accounts, the show and the characters didn't really hit their stride until the second season.

So I think it's safe to say we'll be caught up in the next month or two, and will join the regularly scheduled third season, already in progress.

As an aside, mad proppage to formerly elderly-skewing, stodgy CBS for having the patience to let Big Bang and How I Met Your Mother find their way.