Never got around to posting this for posterity...

In mid-November I embarked on a three-day, two-city road trip to watch a Steeler game in NYC with Jason, who I hadn't seen in quite some time, and attend Monday Night trivia in DC with Messiah, Sean, and others. Had a good time visiting with everyone.

I also convinced my sister to drive down from Boston for a Broadway doubleheader on Saturday, marking my third B-way excursion of 2010 (exceeding my stated goal of two!)

Not only did we see two shows, we saw two shows and only spent $52 each. From the front two rows. "How??" you probably do not care enough to ask. I will tell you anyway.

Many shows have lotteries in which they raffle off approximately two dozen front row or almost-front-row tickets for about $25, a couple of hours prior to the show. If you're in the know, and willing to play it by ear a bit, it's an incredible thing.

First, I won the Wicked lottery. Which is the most difficult lottery to win. So much so that they give you a button to commemorate your victory.

And I say "I" because my sister didn't get to the theater in time to put her name in. So it was all the more impressive since we had only one chance, not two, to win. We both loved the show. There's a reason it's still sold out every show after six years.

After that, we won the West Side Story lottery, which had far fewer contestants. This was what I saw when I leaned forward in my seat. 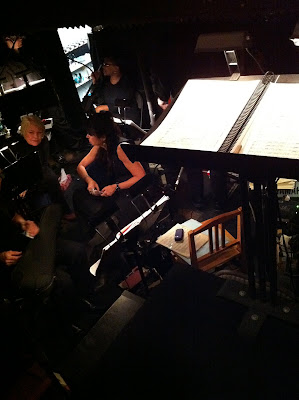 That would be the orchestra pit, and the conductor's stuff. His head was actually kind of in my way. The front row isn't quite as good as you'd think in that particular house. Very high stage.

WSS was not definitely not my favorite show. The ending is dramatic, sure, and it was a groundbreaking show in its time. But I don't love the music. I also have a hard time getting past the "You killed my brother, but I'm totally cool with it and still love you even though I met you like 8 minutes ago." And dancing gang members are just silly. But the choreography and stage combat were cool. And even a mediocre night at a Broadway theater for $26 is still pretty much better than any other night.

I would also like to point out that Sister Jen also won a third lottery the night before, (In the Heights) which is just ridiculous. All three times it was the other person's name (her friend on Friday, me on Saturday) whose name was actually pulled.