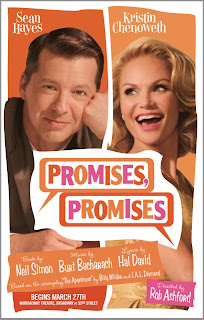 Somehow it had been two years since I'd been to NYC before we went in November.

Ideally, I'd love to go at least twice a year and see two or three shows each time. But that's not so easy to pull off.

That said, I'm optimistic that we might actually go twice this year.

As I mentioned last fall, Emily wants to see A Little Night Music ASAP -- before Angela Lansbury remembers she's 84. And I still want to see Rock of Ages. And we both want to see Wicked. And others.

But a couple of other shows we're intrigued by don't open until April: Promises, Promises starring Sean Hayes and K-Chen, and the London La Cage aux Folles revival with Kelsey Grammer. So perhaps once we see the reviews on those, we'll make a second trip in the spring or summer. Or maybe I shouldn't plan the second trip before the first.

Too many shows, too little time!

Perhaps I should keep a running count of how many stage shows I see before I see a movie.