Hardly worth the two month wait, but... 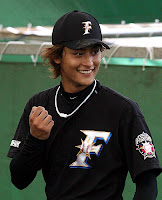 I have come up with some headlines, stadium banners, chants, etc. that will be used in Texas and elsewhere, now that the Rangers have signed Japanese pitcher Yu Darvish.

These are the best ones I could come up with in 30 minutes or less. If anyone's still reading this, feel free to chime in with some of your own!

1. Texas newspaper headline, the day after Yu goes on the disabled list and his AAA replacement is terrible: "Thinking of Yu."

2. New York Post headline after Yu's been a disappointment, is traded to the Yankees, and then pitches surprisingly well: "Happy To Be Stuck With Yu!"

5. Chorus of song that will be played if Yu bats at PNC Park, and Vince Lascheid rises from the dead: "Is That Yuuuuuuu, Baby? Or Just a Brilliant Disguise?"

6. Group of guys who will soon be thrown out of Angel Stadium of Anaheim, holding banner: "FUCK YU." (Group wearing t-shirts that say "YUCK FU" may be allowed to stay, citing late 80's/early 90's "MUCK THE FETS" precedent).

7. Everyone at Rangers' Ballpark, singing in unison: "Oh baby YU! Yu got what I neeeeeed!" And then they should probably stop there, or it won't really make sense.

8. Entry music from the bullpen, if Yu becomes a closer and has sex reassignment surgery: The Smithereens' "A Girl Like Yu."

9. Entry music from bullpen, if Yu becomes a closer and remains a man: "Yu Shook Me All Night Long."