Anyone besides me check out any of the new shows on cable or broadcast this fall?

As longtime readers know, I love to sample, if only to know just a little more about these individual pieces of The Pop Culture.

Two Broke Girls, CBS: Watched one episode. Thought it actually was kind of awful. Apparently others do not agree, given the solid ratings.

New Girl, FOX: This was a tough one. Stopped after watching four episodes. It's exactly the kind of show I should like. And it certainly has moments that make me laugh out loud -- but they're too few and far between. It doesn't clear the bar for "can't miss" viewing -- pretty much the only kind of TV I accept.

Boss, STARZ: This pilot was beautifully done (directed by Gus Van Sant in a very cinematic way). And you can take it to the bank that Kelsey Grammer is going to be nominated for many awards for this show. But midway through the second episode, I couldn't stay interested in all the nitty gritty political stuff. There wasn't enough of an emotional connection to the characters for me. Plus I am tougher on dramas, since they take up more time. But Grammer is awesome.

X-Factor, FOX: Just watched snippets of a few episodes. Much as I love Simon and Paula, I can only handle one time-consuming reality show in my life, and that remains American Idol.

As for the success... 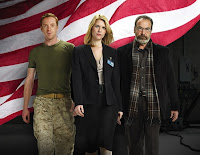 It's a lot like 24 (government agents chasing terrorists), but less frenetic and more of a psychological thriller, with far more character development.

I was reasonably sucked in after the pilot -- then it got a little bogged down in CIA procedural stuff for an episode or two, before picking up big time. Digging it.