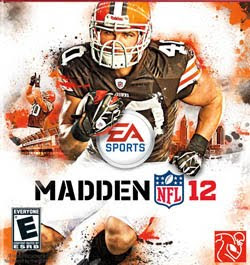 So, I balked last year at buying Madden '11, and played a second year of Madden '10. (While grumbling about the $60 price tag, I also told some kids to get off my lawn).

I am now rid of Santonio Holmes, Limas Sweed, and a host of other obsolete members of the Black and Gold. I was disappointed to find that Antonio Brown did not crack last year's roster, but I do have Emmanuel Sanders. I'm still stuck with Skippy instead of Suisham, but that means I can continue to lead the league in destroying gas station paper towel dispensers.

Also, I must say that the selection of Peyton Hillis for the cover of the new game is ridiculous. Aren't there like 10 better running backs in the NFL?