Get thee to the motherfucking theater 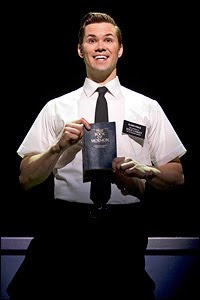 Went to NYC a couple of weeks ago for a Broadway triple-header.

I know most of my twelve or so readers are not huge theater fans, but unless you absolutely hate it, you need to see The Book of Mormon. That's the new musical by South Park masterminds Trey Parker and Matt Stone.

All I can say is that it is one of the funniest things I've ever seen, anywhere. And also hilariously raunchy. There are things said on that stage that you never thought you would hear uttered in a Broadway theater. Or anywhere else, for that matter. Basically, just imagine that the guys who wrote a song with the chorus, "Shut your fucking face, Uncle Fucker" have been allowed to write an entire musical. Because they have. But it's so much more than just raunchy. It's got a clever message, a brilliant score, and heart. Really, can't say enough great things about it. The cast recording came out today, and it's going to be playing non-stop in my car for quite some time.

Anyway, it's going to clean up at the Tonys, at which point you will hear more about it, if you haven't already come across it.

The second show we saw was Catch Me If You Can, the new musical based on the story that inspired the movie. It was just average. You'd think that with such an interesting basis for a plot, you'd be able to make a musical more thrilling than this. It wasn't bad, and had a handful of memorable songs, but it also had some major issues.

And the third show of the weekend was the new revival of Anything Goes, starring Sutton Foster (pictured---not the Mormon guy). I have a bit of a crush on her, and was happy to finally get to see her perform live. Though time constraints and the desire to not embarass myself kept me from saying hello at the stage door. Anyway, the plot of Anything Goes is a little dated and silly, as most 70-year-old musicals are, but when they're well done, these classics are still entertaining. And this definitely was. I'm not usually wowed by the big showy numbers, but there was some seriously entertaining choreography here.

That cast should also pick up some Tony hardware. Speaking of which, I will post my predictions here in a couple of weeks. Don't all shout for joy at once. Really, just control yourselves.