And I am not a television set 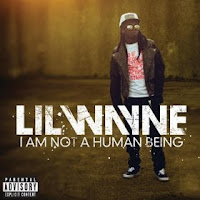 I realize it's not new, but it's the first time I've ever heard of it: Lil Wayne has an album (and song) called "I Am Not a Human Being."

But that's not the most enjoyable part.

The first track on the album is "Gonorrhea." And a few songs later there's a track called "I'm Single." Which I suppose shouldn't surprise anybody, given that he's some sort of cyborg singing about a sexually transmitted disease.