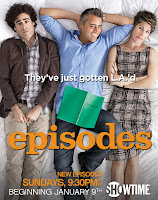 I'm watching and enjoying the premiere season of the Hollywood-skewering comedy Episodes on Showtime.

It's a BBC/Showtime joint effort, which means it's hardly a time commitment: The entire season is only about as long as a Lord of the Rings movie.

You can read more about it here.

Matt LeBlanc isn't technically the main character, but he's definitely the big draw -- playing "himself" in a Larry David sort of way. And so far, I'm impressed with the show, and the vastly underrated LeBlanc's clever attempt at getting himself back into the game.