I'll talk about it so that it won't happen 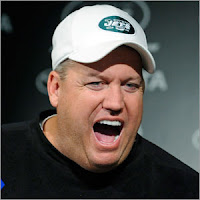 If the Jets were to beat the Steelers, would theirs be the most impressive playoff path to the Super Bowl ever?

Not only would all three wins come on the road, and not only are these the 1, 2, and 3 seeds in 2010, but they're also the only teams that have represented the AFC in the Super Bowl in the last seven seasons.

I think that would be a more amazing feat than the Steelers pulled off in '05. The Colts were far better that year, but I feel like the Broncos weren't really that good, and the Bengals are the Bengals, even with a good record. Especially when you fold Carson Palmer in half on the first play.

That said: We really need to lay the smack down on their arrogant asses. I almost always root for the AFC team in the Super Bowl when the Steelers aren't playing, but I could not root for the Jets. And having to look at Rex Ryan for two weeks of hype and the game itself would be really unfortunate.