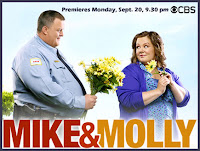 I didn't have much interest in this fall's slate of new network shows. But I did take a gander at three new comedies:

Mike & Molly: It airs during the successful CBS Monday comedy block, and comes from the Chuck Lorre sitcom factory, so I thought I'd give it a spin. The pilot wasn't terrible. Plenty of the jokes were clunkers, but it had a few legit laugh-out-loud moments too. The premise -- two overweight people dating -- is actually kind of refreshing, and the two leads (including Swissvale's own Billy Gardell) pulled off the touching moments extremely well. But after watching two more episodes, it just wasn't funny enough to be worth a Season Pass.