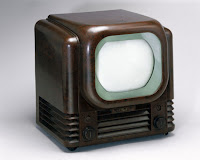 With the broadcast television season underway as of last night, I thought I'd react to some of the factoids I found in an article in Variety.

True, that's up from 1.2% in January 2006, which represents a pretty fast rise to prominence for the little Devices of Joy. Yet the number still always seems low to me. After seven years, I can really no longer imagine the constraint-filled waste of time that is watching TV the normal way.

The average American watched 35 hours and 34 minutes of TV a week last season.

Holy mother of pearl, that seems like a lot! This is why we all need DVRs!

This just seems made up. Is this only because viewers 45 and older watch more TV, and maybe there are more of them?

54% of households have HDTV.

In, 2003, I would've predicted that DVRs would grow faster than HDTV. As awesome as HD is, I think a DVR is still more of a game-changer. But I guess there are a few factors at play: a) HDTV has gotten better and better; b) I suppose it's easier to see, in a store, the impact HD will have, versus a DVR; and most importantly c) It seems you can't actually buy a non-HDTV anymore unless you really work at it. Which would be stupid.

Dramas account for 41% of all viewing across the broadcast networks.

Is this fuzzy math? This probably means that dramas account for 41% of all minutes watched. Which doesn't tell us all that much, since they are twice as long as comedies. In any event, I definitely watch more comedies than dramas, but I don't know how my percentages match up. A project for another (I'm sure thrilling) post.