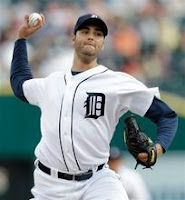 On the bus ride home from work yesterday, I was listening to the Mets-Padres game on the iPhone. As I arrived home, the announcers mentioned that Armando Gallaraga had a perfect game going through 8 innings.

The power was out because we were in the midst of some nasty storms, and I was very annoyed that I couldn't turn on the TV to watch. So I did it up old school (except that it was on an iPhone), listening to the Tigers' radio broadcast of what will surely become one of the most famous 9th innings in baseball history.

The announcers' calls of Austin Jackson's catch and the final out were so exciting, I was reminded why baseball on the radio is so cool. But at the same time, I can't imagine living in a time where you might never see such plays unless you were actually at the game! I only had to wait another hour for the power to come back on, so I could flip on the MLB Network and watch it replayed from every angle.

As for the blown call itself: I think something has to be done about the tradition of Major League umpires never reversing themselves. I don't know the logistics of how you work in replay, who initiates challenges, etc. But my initial reaction is that on a play like this, the umpires themselves should say "Let's take a look to make sure we got it right."