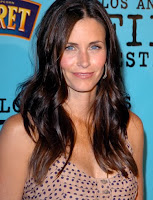 With the Fall network schedules out, this year's Ted Marshall Open results are more or less official. (The Open is an annual late-summer competition where you try to guess which prime time shows will not survive the upcoming TV season).

I put a decent amount of thought into my entries this year -- meaning I actually knew what all the shows were that I was saying would be cancelled.

The result was a strong 12th place finish out of 104 entrants. My picks:

I cannot make any argument that I should've finished first, because no matter what, I would have included Cougar Town. The horrid name really threw me.

But I could make a semi-flimsy argument that I should've have finished fourth.

As I am on the record as saying way back in September, I accidentally deleted CBS's Accidentally on Purpose -- which was eventually cancelled. It was supposed to go in the 9-hole. If it had, Cougar Town would've been 8th, and could've been my only miss, since I wouldn't have tossed in the OK-seeming Community.

Of course, I should've just picked one of many other shitty-seeming shows instead of Community.

But whatever. That's my story and I'm sticking to it.