How I Could Have Seen Catherine Zeta-Jones' Thingies, If Only She'd Forgotten to Wear Her Rubber Suit

Made a jaunt to NYC from Saturday to Monday. Great success!

We actually got a hotel room right in Times Square instead of relying on the generosity of others in the NYC metro area. First time ever doing that -- and man, is it great. There aren't many places where I wouldn't be offended paying $30 a day to park, but this was one of them. Totally worth it to be right where we want to be for the whole weekend.

As for the theatergoing: I enjoyed both shows that we saw on Sunday, but you'd be hard pressed to see two more different musicals in one day!

To illustrate, I'll use images from the Opening Night curtain calls. 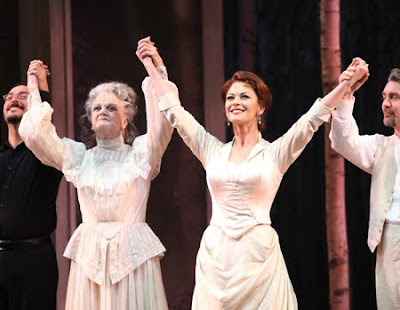 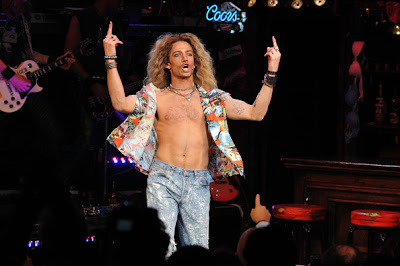 Night Music was a pretty good show overall, and very funny at times. Dragged a little in spots for me, and Sondheim music is not my absolute favorite. But I'm still very glad I saw it.

Also: I was really close to the stage and very far to the side, so I was one of the few people who saw Catherine Zeta-Jones' fake rubber boob suit that she apparently wears underneath her robe when she flashes one of the other characters. It was not nearly as exciting as if she weren't wearing the boob suit. But there was a split second of great anticipation.

Rock of Ages (whose score consists of entirely 80's hits) is like no Broadway show I'd ever seen. The whole place is decorated like an 80's nightclub. They hand out LED lighters to wave during the slow songs. There are waitresses serving drinks during the show. It is raunchy and juvenile and loud, and...well, a pretty damn good time! Definitely a musical that would be enjoyed by people who don't like musicals.

My only gripe was that they lamely announced at the very last second that star and former American Idol contestant Constantine Maroulis and his female co-star were both out. This ground my gears and put me in a bit of a pissy mood, which I snapped out of by the second act.