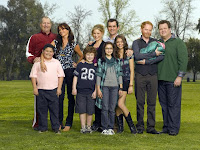 Episodes watched: All 4, and counting

My take: The most critically acclaimed comedy of the new season is worthy of said praise. Great ensemble cast featuring TV vets Ed O'Neill and Julie Bowen. Excellent, funny mockumentary-style writing that feels refreshing, true to life, and far removed from the traditional sitcom gags. And given that comedies tend to improve over time, finding the jokes and situations that work, I'm optimistic that Modern Family will get stronger.

My favorite character by far is Phil, played by Ty Burrell. Burrell was actually in the short-lived FOX series "Back to You," and he was basically the only funny part of that show. I was sure he was too talented to not show up somewhere else, and indeed he has. (Not an accident, given that the two shows have the same creators).

Crystal Ball Prediction: As Messiah put it in a recent e-mail, "It's a keeper." People have been watching from the start, and this past Wednesday's episode was up over last week, and was the third-highest rated show of the night. It's still early, but it looks good for a second season and beyond.
# posted by Dan @ 3:00 PM
0 comments. Leave one!