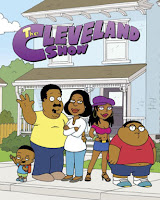 The Family Guy spinoff has come out of the gate as one of the top-rated new shows of the season. I'm obviously a huge FG fan, but the pilot was just OK. I already mostly keep up with American Dad, which is woefully inconsistent. Not good enough to pick up.

I kind of was. I watched the pilot and that was it. Jason Schwartzman creeps me out a little. I can see how it could develop into something useful (and it will get the chance, as HBO already renewed it). But I'll pass.