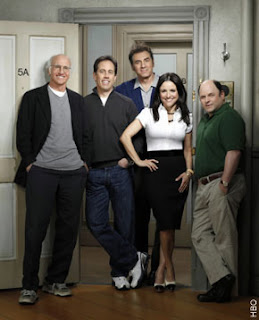 Jerry, George, Kramer and Elaine (and Newman, Mrs. Costanza and Bania!) -- together again!

I am ridiculously, giddily, insanely excited for Season 7 of Curb Your Enthusiasm, which begins in mid-September.

It was announced a while back that Jerry Seinfeld, Michael Richards, Julia Louis-Dreyfus and Jason Alexander would be on several episodes this season. But now we know what they'll be doing: filming a Seinfeld reunion episode in Curb's alternate universe!

So we'll get to see them playing themselves, and also filming a "new episode" of Seinfeld on the old set.