Two things that must cease

The combining of names of couples or potential couples, a la "Bennifer."

In pop culture time, it's been 340 years since Bennifer was a hot gossip-page item. The name-merging was only mildly clever then, and now it's painfully lame.

The practice seems particularly rampant these days among TV fans talking about fictional characters. While I love the brain candy TV columns like E's Watch with Kristin, I can't stand the name-making. If you like the Sawyer/Juliet pairing on LOST, just call them "Sawyer and Juliet" -- not Jawyer or Suliet.

And no, Kristin, I will not call these two "Robarney!" 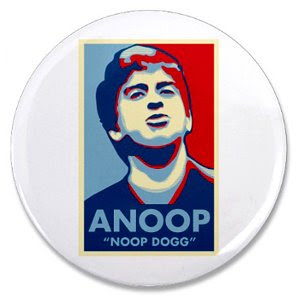 **The Mike Tomlin "Yes We Can" shirt gets a pass, because a) it was months ago, and b) it's a Steeler-related product. Automatic exemption.