Apparently it's all been done, because this is where it ends... 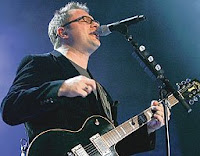 I know it's not "important" in any real sense, but I felt a little like I was socked in the noggin upon reading that Steven Page has left Barenaked Ladies.

Partly because I love the band and feel connected to them. Partly because I felt they were one of those bands that would never splinter; that they'd continue on together until they all decided to take a break. And partly because I'd been waiting to finally get a chance to take Emily to one of their concerts. She has never experienced the fantastic spectacle of energy, humor, and improv that is a Barenaked Ladies live show.

I've seen them in concert three times. Unlike many bands, it was not a mere live rendering of their greatest hits CD. It was never the same thing twice. They would come in armed with knowledge of the city they were playing, and they'd make up songs on the spot about weird stuff that they saw during their afternoon stroll around town. They'd tell wacky stories and pull out weird dance moves. They'd launch into a medley of Britney and Christina Aguilera songs that would end with Page singing "Memories" from Cats in a voice that made you wonder how he didn't end up on Broadway himself.

The band is going forward without Page, which is understandable given the other band members' relationship, but still a little difficult to fathom. Ed Robertson is (almost) equally awesome, but he only sings like 40% (less?) of the BNL back catalog. And Page's voice is so distinctive, I don't think I could stomach hearing someone else sing "Break Your Heart" or "The Old Apartment."

To everything there is a season, I suppose. And in this era of comebacks, reunions, and Brett Favre-esque retirements, I can't quite believe that we've seen the last of these guys together on tour.

In any event, I know what will be "Top of the Pod" beginning with my bus ride home tonight...