They definitely protest too much 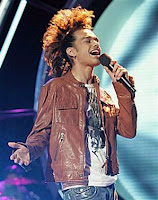 You know the theory that says the most outspoken homophobes are actually the self-hating closet cases?

Well, I think a modified version of this theory may be applicable to the folks at Vote for the Worst.

You may have heard of the site. It is a group of rabid anti-American Idol activists. They (allegedly) hate the country's #1 show so much, they spend countless hours of their free time watching and dissecting it, writing about it, and trying in vain to damage the show. These idiots clearly spend more time thinking about the show than its fans do.

Which makes me wonder: What in the hell is wrong with these people?

That's not a rhetorical question. I actually want to know. Do they actually love the show but hate themselves for it? Is it some sort of mental illness? Jealousy? The childish, unthinking bashing of anything that is immensely popular? Is it secretly operated by the networks that foolishly passed on Idol before it was pitched to FOX? Or maybe it's operated by FOX, on the theory that all publicity is good publicity.

If it's anything other than the last option, then I'm just saying for the record that these people have serious problems.