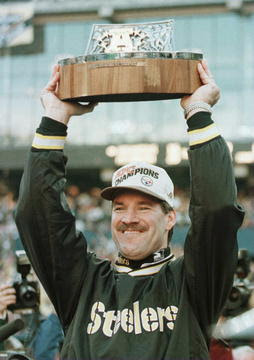 I can't add much to the commentary about yesterday's terrific Steeler win. So let's look ahead -- and back.

Let us bask in -- and appreciate -- the fact that this Sunday we will watch the Steelers in their seventh AFC Championship game since 1992.

Of course, only two of the previous six have ended well.

Here's my personal ranking of the games, from best to worst.

1. 1995: I don't think anything can top this one, since it was the first time in my (real) memory that the Steelers got to the Super Bowl. And there haven't been too many endings more heart-stopping than Jim Harbaugh's Hail Mary in this one.

2. 2005: This is the only other game the Steelers actually won, so it's obviously going to hold down this spot. Also an amazing day, but it was sort of anti-climactic after the insane Divisional game against Indianapolis. And they also jumped out to a big ol' lead on the Broncos (who that day were, indeed, "just Yonkos.")

3. 1997: I absolutely do not remember this game against the (non-Yonko) Elway-led Broncos. No idea why. I mean, I remember the basic storyline: Kordell threw interceptions. But I don't know if I really remember it, or just know that this is what happened. Maybe I felt it was Elway's turn to shine and I expected them to lose, so I blocked it out. In any event, that's why it's ranked as the least bad of the losses.

4. 2004: This one hurt, certainly. A 15-1 season that was remarkable in so many ways, ended with a trouncing. But Big Ben's ridiculous rookie magic was bound to wear off, and the trouncing came at the hands of the defending Super Bowl champs. So it couldn't possibly have hurt as much as.....

5. 2001: This one really stung. The Steelers entered as big favorites over the Patriots. Sure, the Pats would launch a dynasty that day -- and losing to that team is nothing to be ashamed of -- in retrospect. But at the time? Really horrendous.

6. 1994: The aforementioned Pupunu Debacle. After making the playoffs in Bill Cowher's first two years, this was the first time we could taste the Super Bowl. And the last-minute loss came only about two years after the game that trumped all of these -- the Pirates' loss in the '92 NLCS -- so I began to believe the city was cursed. Anyway, the Chargers had no business getting to the Super Bowl, and I think this '94 Steeler team was better than the '95 team that (mercifully) reached the big game the next year. I remember distinctly that I laid motionless on the floor, face down, for about 20 minutes after this game ended.