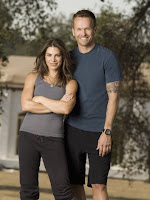 Quick thoughts on a few shows as we move through November sweeps. Feel free to chime in if I'm dissing (or praising) your shows.

True Blood: Alan Ball's (Six Feet Under) new HBO venture was not in my original TiVo lineup, but we got sucked in*. I was lukewarm* on it for the first few episodes, but it got its fangs* into Emily from the start, and I got more and more hooked. Given the ratings trend, I'm not alone on that. Definitely recommended. Could help HBO get out of the wilderness.

Grey's Anatomy: Is Izzy headed for an early exit? Or is Shonda Rhimes turning Grey's into Ghost Whisperer? I like the cast additions. Still good stuff.

Heroes: I'm enjoying watching the episodes, but it's still ridiculously complex. And the "big picture" plot development is a big pile of meandering inconsistency. Not sure it's got the legs to survive long-term.

Biggest Loser: The King of Guilty Pleasures. Both Emily and I freaking love this show. We laugh, we cry, I yell unspeakable insults at the Blue Team. Good times.

Entourage: Freakin' love this one, too. The writers can more or less do no wrong as far as I'm concerned. It's TV escapism at its best.

Pushing Daisies: Toying with the idea of demoting it out of the lineup -- but ABC may beat me to it. I've never seen a show that's so brilliant in so many ways, but also missing... something that would make it a little more compelling.