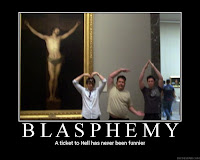 Like this typo I pointed out in May, if you accidentally type "blogpsot" instead of blogspot while heading to your favorite Blogger site, you'll be redirected to a page run by some serious whackadoodles.

What I've learned so far:

Ironically, the site's "real" URL appears to be azt.com. I'm guessing it was not named for the first approved treatment for HIV.