Where in the World is Dan's iPhone 4? 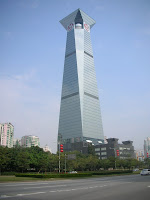 According to Apple's site, my phone has shipped!

The release date is June 24 (Thursday), yet FedEx says it will arrive Wednesday. I am skeptical.

Either way, I figured I'd learn a little geography and share a little trivia while I track my gadget of joy.

My phone began its journey late last night in beautiful Shenzhen, China, which is home to the giant penis tower you see above.

According to Wikipedia, Shenzhen is now "reputedly" one of the fastest-growing cities in the world. It's the second busiest port in mainland China, and home to the Shenzhen Stock Exchange. And probably a couple of baseball players the Chicago Cubs will someday overpay for.

From there it was on to nearby Lantau Island, the largest island in Hong Kong and -- though misspelled in translation -- named for Martin Landau. It is home to Hong Kong's new international airport, and "Ngong Ping 360," which is presumably either a Microsoft video game console, or the show that follows Larry King Live on CNN China.