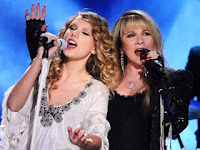 What happens when a music superstar has it all --- except a great voice?

Like Leno v. Coco, the issue of Taylor Swift's voice is a pop culture debate I find worthy of discussion.

In case you missed it: Swift won an armload of Grammys this week while simultaneously making our ears bleed in an ill-conceived duet with rock legend and DanNation icon Stevie Nicks.

This has led to a ramp-up in the inevitable backlash that follows anyone's success in the music industry. The head of Swift's record label is now responding. On the one hand, he admits she's not the best "technical singer." In the same breath he blames the Grammy equipment and says she's the "voice of a generation."

Swift is an undeniably talented songwriter, and a freak of nature who began penning hits when she was ridiculously young. And within her comfort zone, she sounds fine. When she's on key, her voice has a gritty, "real" quality that nicely fits the honest and straightforward subject matter of her songs. (Unfortunately, she has no margin for error and "gritty" quickly morphs into "nails on a chalkboard").

Plus, by all accounts, she's the quintessential Anti-Britney. No drinking. No drugs. Smart. Hard-working. No driving with kids not secured in car seats. A nice contrast to all the idiots populating the music scene.

I go back and forth on this. I can't deny that it's somewhat disheartening to see the Album of the Year winner so badly off-key. Especially when in the same Grammy show, you had a powerhouse like Pink showing us how it's done. But I guess in the end, there's a place for everyone, and you can't diminish the effect of Swift's total package.
# posted by Dan @ 2:00 PM
0 comments. Leave one!