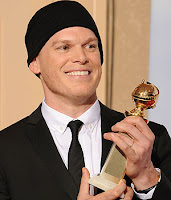 If I did a favorite actors/actresses list, Michael C. Hall might be at the very top. First, he's a phenomenal actor. Second, he's starred in two of my favorite shows of all-time (Six Feet Under and Dexter).

Last night he picked up his first Golden Globe for Best Actor in a TV Drama last night, a week after announcing he's battling Hodgkin's lymphoma.

Even though it's one of the "better" cancers you can get, and his treatment is said to be going well, it was jarring to see video of his acceptance speech, during which he wore that tell-tale knit cap.

So a hearty congrats on the award**, and D-Nation's thoughts, psychic waves, prayers, etc, are with you.

**John Lithgow also won for his supporting role on Dexter, and he damn well better win an Emmy too.