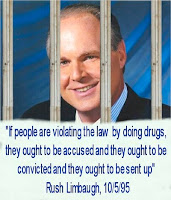 Here are the changes you can expect if Rush Limbaugh wraps his slimy tentacles around the NFL:

9. Rush will propose contracting the Green Bay Packers franchise because he believes they're "pushing a homosexual agenda."

8. The Patriots and Saints will automatically win the AFC East/NFC South every year, because it's what Jesus would want.

7. The Miami Dolphins will be known as the Miami Delicious Tuna Additives.

6. An asterisk will be placed next to Donovan McNabb's five NFC Championship appearances that clarifies they were all liberal media fabrications.

4. Resultant confusion over the difference between challenge and penalty flags will be blamed on Keith Olbermann.

3. No minorities on offense. Samoans limited to Special Teams.

2. During a team meeting, Rush will tell Rams free safety Oshiomogho Atogwe to take the bone out of his nose and hit the weight room. Upon finding out that Atogwe is of Nigerian descent and Canadian, Rush will order Dick Cheney to shoot him in the face.

1. The Rams will play with only right tackles, right guards, and right cornerbacks, ensuring that they will suck even worse than they do now.