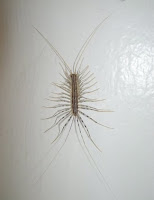 ...aka "The House Centipede." I do not like these particular bugs.

I'm not a huge fan of creepy-crawlies in general, but as long as they don't bite and aren't near my bed, I can semi-tolerate them. But these are particularly distasteful. I saw just a few at my old apartment over the years, but we've seen a bunch in the new house since we moved in.

They are huge, have 15 sets of legs, seem to come out of nowhere, and are insanely fast. According to this surprisingly detailed Wiki bio, they can reach speeds of nearly one mile per hour.

The good news is that they appear to be very useful -- feasting on other bugs and doing other cleanup work. So I've been convinced to fight my instincts and let them live whenever possible.