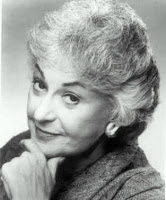 Didn't get a chance to comment on a couple of high-profile passings:

Harry Kalas, the longtime announcer for the Philadelphia Phillies and NFL Films, had one of my all-time favorite voices. Whenever I think of him, I think of two phrases that Messiah and I always repeated during our college years (spent in Phillies country). One was, "Ground ball to Morandini..." and the other was "Ricky Jordan....batting a LUSTY .485 on the spring." I have no idea whether he ever actually said this second one, or if it just evolved from some other joke. But I can hear it in my head even now.

Anyway, "Inside the NFL" and Chunky Soup commercials will just never be the same. I got all choked up listening to ESPN's Jayson Stark getting emotional about Harry on Mike & Mike.

Then yesterday, the entertainment world lost Bea Arthur. Last year I used the occasion of Estelle Getty's death to discuss the Golden Girls' status as one of TV's funniest, most timeless comedies. So today, I just salute Bea Arthur's contribution to the show and to my "TV childhood."

(I never watched Maude, but I'm sure she was swell in that too).