Pittsburgh is a cult

Is that the best way to explain how this story about Pittsburgh's (relatively) booming economy is the second most e-mailed story on the New York Times website? 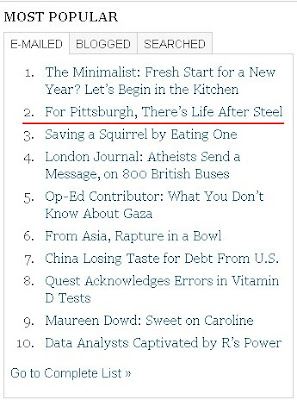 Even though a story like this has little business being interesting to a national audience, it isn't a terribly unusual occurrence when it comes to the 'Burgh. But why?

One theory is that there are simply a ton of ex-Pittsburghers out there. This may be, but they'd have to still care almost obsessively about the city. Like, all of them.

There's also the reasonable theory that current Pittsburghers are driving the interest. The theory goes, in short, that they're oddly insecure and care way too much about what outsiders think about the city. They must read and revel in (or wallow in) every morsel of national publicity.

There is some merit to this, I feel. How such a culture is created, I'm not sure. We'll let the Comet delve into that at length.

UPDATE: Now there's a big ol' picture of Dick LeBeau (and a story about the Steeler D) on the front page of the NYT site! How long until that bad boy is the #1 most e-mailed?