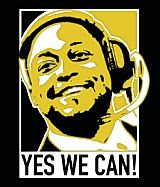 Notes on the game, and my weekend in Washington, D.C:

Where I Was: We watched the first quarter at the most insane Steeler Bar I've encountered. It was more like a Pittsburgh Embassy. Three full stories of floor space packed with wall-to-wall humanity and Terrible Towels. We actually left after a quarter because we couldn't eat, drink, move, or sit down. Ended up at a sushi bar where there were very few people and we had three huge HD screens to ourselves.

Possession is like Obscenity: You know it when you see it. Maybe that's the reason the NFL has such trouble with how to define a catch? The call that negated Santonio's catch and touchdown in the first quarter was absolutely correct reasonable given the vague rule. It's also the worst rule in football. Jesus. In addition to possessing the ball, a wide receiver has to not let the ball hit the ground, get up, recite a poem, spin around three times, and sign several documents before something's declared a damn catch. When you have total, obvious control of the ball after a catch and are lunging for the endzone, you are essentially a running back. And for a running back or other player with established possession, the ground cannot cause a fumble. Can I get a "Hell Yeah?"

Questionable officiating: Some ticky-tack calls and non-calls... but nothing was more ridiculous (even though it benefited the Steelers) than the roughing the kicker. Mitch Berger is a worthy thespian.

And speaking of him: Berger's tackle of LeonHard on that runback was probably the greatest kicker tackle I've ever seen. He ignored a stiff-arm, brought the guy down, and forced a fumble. LeonHard should feel silly. Had the ball stayed in bounds and been recovered by the Steelers, that play would've been leg-en-dary.

Can someone please... tell Lame-us Sieve that he's a wide RECEIVER? He did save three points by breaking up an interception. By my count, he only owes us 4 points now.