Everyone's after me Lucky Charms! 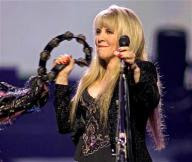 NEW YORK (Billboard) - Fleetwood Mac will embark on its first tour in five years next spring, beginning March 1 in Pittsburgh.

Not only are they planning a new album and launching a 40-city tour, but they are starting the tour in Pittsburgh? What? Why? How? Who does that?

While it is extremely exciting, it also means the tickets may be harder to get deals on, as the truly crazy fans may migrate here to see the first show. Though I base this on nothing.

Also, Bram is trying to take my money. Or more accurately, he's trying to get me to give it to Nintendo. I'm not going to, not quite yet. But it's definitely tempting after seeing the Punch-Out video he posted at WNW.