Scoop you'll only get here 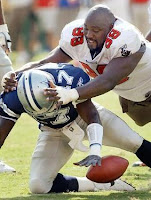 I can't tell you how I know this, exactly, but I have it on good authority that Dancing with the Stars is considering (and I stress considering -- no more is known) a Pittsburgh-based celebrity for its upcoming season, which begins in March.

This led me to speculate about some of the possibilities:

Who else lives in Pittsburgh and is well-known enough to be on the show?